When we became aware of Caledonia Mumford High School senior .. Kenna .. being labeled as the 5th ranked goalie in all of Western N.Y.'s Section 5 Division, the "wheels began to turn".

Kenna's parents had asked us (as they did with their older daughter two years ago) to capture her class of 2014 senior photos, both candid and a formal closeup for the yearbook. We naturally obliged as we love working with the family and high school seniors in general. One of the things I love about high school seniors is their level of energy as well as their enthusiasm for what lies ahead for them. 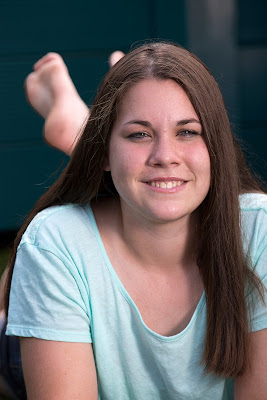 As it turns out Kenna, a very cute and energetic young lady is indeed a highly gifted soccer player at the high school level. So what happens when the "wheels begin to turn" .. you ask? How about placing a call to the Rhino's organization regarding the use of their field, Sahlen's Stadium. At the time it seemed like a long shot but I figured, what the heck. The worst they can say is no.
After reviewing their website, I realized I needed to place a call to their PR specialist, Colleen Brown. She and the Rhinos could not have been more obliging. After checking their practice schedule, the organization came up with a date that we could use to fulfill our candid, senior photo project.
That project was to capture Kenna in her soccer uniform, both in and adjacent to the goal situated directly beneath the Sahlen's Stadium scoreboard. We had our date, we had our time, we had everyone's permission and we were ready to go.

So what kind of gear to you bring for a photo opp such as this? Of course the grand papa of my dslr's comes out of the bag .. the Canon EOS 6d .. a superb, full frame camera with excellent features including WiFi. With some sessions, we send the photos, as captured, over to a tablet for immediate client approval. Such was not the case here as seeing the tablet's screen outdoors is very difficult. For those camera buffs out there, the 6d is not really designed for action photos. It is more a portrait / landscape type of camera. On this day however, it was mostly posed photos we were interested in, so the 6d was a fine choice. 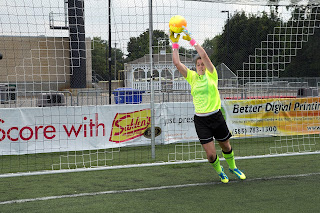 We did however procure a few photos of Kenna in action in the net, sometimes with the more action styled Canon 7d. 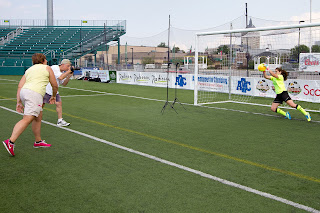 With her back to the popping in & out Sun, her side facing us was of course shaded. To fill that in we utilized a pair of Canon 580 EX II flashes.

No diffuser is necessary when filling in against a overly bright sunny background.
You camera folks would appreciate the fact that we needed a somewhat faster shutter speed. 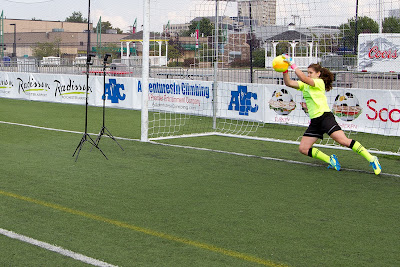 Knowing I would exceed flash "sync speed", I set the flash units for HSS. Power is thus greatly reduced so this was another reason for no diffusers and maintaining a closer flash-to-subject distance. Fill flash is somewhat of a challenge when you have a bright sunny background with which to work against.
As you can see in the 3rd & 4th photos (down from the top) her mom was throwing the ball into a planned position while I tried timing the photo capture. In the cropped close up of the same photo you can see the twin flash units lighting the area. Both flashes were attached to radio receivers. They were signaled to fire from a radio transmitter atop my camera. 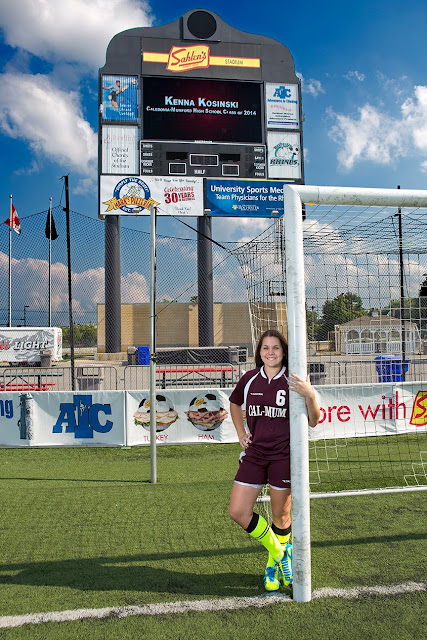 For the grand finale, we posed Kenna, now outfitted in her Caledonia Mumford High School soccer uniform, alongside the goal directly below the Sahlen's Stadium scoreboard. Besides the Sahlen name, there was another great reason for doing so. To our surprise, our PR specialist & Rhino representative, Colleen had arranged for a little surprise for Kenna .. look, in this final photo, up onto the scoreboard .. there in big lights is her full name, school and senior class !! Speaking of class, what a great organization the Rhino people are. Kenna, her mom, my wife and I were stunned to see that up there in lights. WOW .. what a great thing to happen to a fine young lady & great soccer star.

On behalf of Stochl Imaging, Kenna & her parents .. we would like to thank the Rhinos & Colleen Brown for providing this young lady with a great experience.

Posted by Stochl Imaging at 6:49 PM No comments: